India including Nepal is at high risk as far as the vulnerability for earthquakes are concerned. India’s Meteriological data suggests that Srinagar and Guwahati are the two of the Indian cities considered as the most vulnerable and earthquake prone areas. They fall under the Zone V of the seismic zones of India which are considered to be the very severe intensity seismic zones of the country.
Read More on your cities here

Not only these two cities but there are other eight cities including the capital that fall under the “severe intensity zone” or the zone IV according to the seismic zoning maps of the country issued by the Bureau of Indian standards and is quoted in the National Disaster Management (NDM) report.

There are other 30 cities which fall under the category of “moderate intensity zone” or the Zone III of the seismic map.
The Indian cities are highly populated including the capital city and thus the report from the National Disaster Management stated that majority of the constructions in these cities are not so earthquake resistant. Thus if earthquake strikes in any of these cities it can turn into a major disaster.
The precautionary measure
What can be done as a precautionary measure is a concern? There can be no building or structure that is entirely resistant to earthquake but the buildings can at least be earthquake resistant. The goal of the earthquake resistant structure is to build in a way that is able to withstand the seismic attacks better than the conventional buildings.
Delhi as stated earlier is in the seismic Zone IV which indicates that the risk from the damage of the earthquakes is very much poignant in the city. The experts and seismologists feel that 70 percent of the buildings in Delhi and Noida can’t withstand the jolt of an earthquake more than six on the Richter scale.
Approvals and code compliance 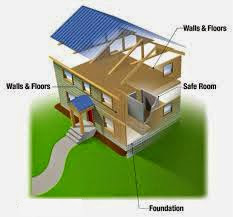 The structural engineers specify the codes of a building that is a way the prospective buyer can check how much earthquake resistant the building is. Building codes are the set of regulations that govern the design, construction and the alteration and materials used for constructing a building. These codes specify the minimum requirements to safeguard the health and safety of a building and the welfare of the occupants.
The expert says that before constructing a building it is compulsory that a developer gets the structural design cleared and approved by the local municipal authorities. Furthermore the developers and builders are required to procure the certifications from the registered structural engineers who assure that the building constructed is building code compliant.

How resistant are the earthquake resistant buildings?

The relevance of earthquake resistant structures are that there may be cracks due to heavy earthquakes but the building won’t fall apart. During an earthquake the residents may feel a shaking or tossing effect but the experts say the building will still not fall. The reason is the structure of the building is such that it will hold the walls, floors and the roofs. At the most what can happen is a fissure or a crack.

Are the low height buildings safer than high rises?

There is a misconception that buildings with shorter heights are safer than the high rises. Does that mean that buildings with lesser heights are less vulnerable to damage by earthquake? But the experts feel that lesser tall buildings can also be among the worst hit in the damage caused by the earthquakes. If the shorter buildings are not being constructed properly with proper adherence to the building codes they are at greater risk of falling apart.
Share :
Tweet
✚